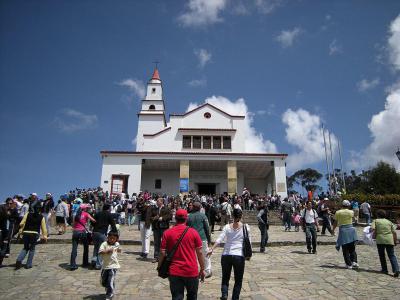 The Basilica of the Fallen Lord Christ of Monserrate is a Catholic basilica located at the top of Monserrate hill, a sanctuary that became a pilgrimage destination since the 17th century. Originally built as a colonial chapel, it was finished in 1657 and dedicated to the Fallen Lord Christ. The statue of Fallen Christ, work of Pedro de Lugo Albarracín, is still standing next to the church, dating from the mid 1650s. For centuries, many miracles have been attributed to this statue, making the Monserrate Church and the statue a popular pilgrimage destination. The growing number of worshipers and the damage incurred in the original construction during the 1917 earthquake, forced authorities to build a new church at the top of the hill. It was designed by architect Arturo Concha Jaramillo in Neo-Gothic style. The new church was built with the help of pilgrims who climbed the hill to visit the Fallen Lord of Monserrate, carrying at least one brick; it was completed in 1925.
Image Courtesy of Flickr and Erik Cleves Kristensen.