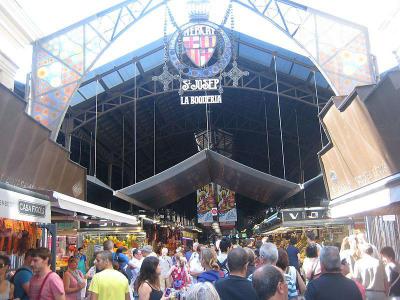 Located to the north of Las Ramblas and a couple of blocks south of Catalunya Square, the Mercat de Sant Josep de la Boqueria, commonly known as simply La Boqueria, is extremely busy no matter what time you go, but the vendors are so quick and used to it and the market is so large that the crowds are quite tolerable. The first-ever mention of a marketplace here dates back to 1217 when the stalls were installed near the old city gate to sell meat; however, it wasn't until 1826 that the market was officially recognized.

La Boqueria is a great place to learn about Catalan traditional food, to take yourself on a tapas tour, to learn about and sample jamón (usually served with cheese), to buy the world's freshest saffron (sold in various-sized small boxes) and fresh-caught seafood (no fish Sundays and Mondays) or buy tasty culinary souvenirs to take home. There's also a sit-down counter/bar-like place, called Kiosko, that offers fresh fish cooked right there for you. And, of course, there's an abundant choice of olives and fantabulous fresh fruit!

Explore deep into the market where some of the better stalls are. Try a little of everything and you won't be disappointed.

Tip:
Keep in mind that there are lots of pick-pocketers in the area. Whether by yourself or with friends, it's a good idea to watch your belongings.