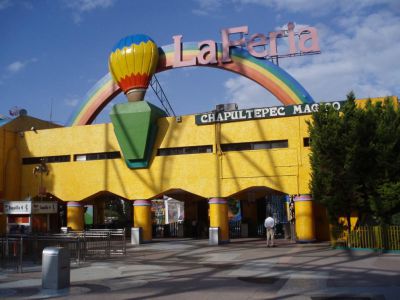 La Feria Chapultepec Mágico is an amusement park in Mexico City. Located in the middle of Chapultepec Park near the Constituyentes Metro station, it opened in 1964 as Juegos Mecánicos de Chapultepec and was operated by the Mexican government. In 1992 Grupo CIE bought it and changed the name to the current one. It is considered to be one of the most famous places for children in Mexico city. La Feria Chapultepec Mágico has approximately 50 different rides and other amusements, as well as several animal attractions. While this list includes many flat rides, it also includes several former record-holding roller coasters: among these, Montaña Rusa, which held the world's record for tallest roller coaster, and Montaña Infinitum, which was the first roller coaster in the world with three vertical loops. One of the coasters, Cascabel, was formerly at Kennywood amusement park near Pittsburgh, Pennsylvania. The park also contains a wild mouse roller coaster named Ratón Loco. Another of the park's noteworthy attractions is a zero-emission scenic train that was developed with the help of the Institute of Engineering at the National Autonomous University of Mexico. The park has a multi-tiered pricing structure for its ride passes. Lower cost passes allow for admission to many of the smaller flat rides, while more expensive passes allow for admission to the more extreme rides, such as the roller coasters.
Image by Dag Lindgren on Wikimedia under Creative Commons License.
Sight description based on wikipedia