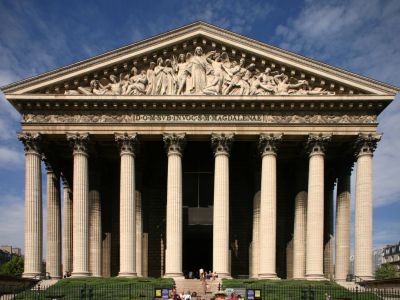 La Madeleine is a Roman Catholic church affiliated with the Benedictine abbey in Paris.

Its construction, started during the reign of King Louis XV, suffered several stoppages including a major one during the French Revolution. Eventually, in 1806, Napoleon announced the decision to make it a temple to glorify his Great Army and commissioned to the job the architect Pierre Vignon. Evidently aware of the emperor's taste for opulent imperial Roman-style architecture, Vignon came up with the idea of an enormous Corinthian temple. He was still working on the project when Napoleon was demoted. The replacing him King Louis XVIII kept Vignon on, but ordered that the temple be made into a church.

The most striking feature of La Madeleine is its enormous size, in part prompted by the surrounding monumentality of Place de la Concorde, but also, no doubt, due to the inflated ego of Napoleon Bonaparte himself. Devoid of windows, so as not to disturb the severity of the temple, the light is let in from above, via three domes open at the top, in the manner of the Roman Pantheon. Each dome is supported by four Corinthian arches with pendentives, featuring a grand imperial Roman style.

Tip:
In the basement of the church is the Foyer de la Madeleine which today plays host to some of the most fashionable concerts and wedding parties in Paris. The concerts take place several times a month on Sunday afternoon and include baroque and chamber music, as well as organ recitals and symphonic orchestral performances.