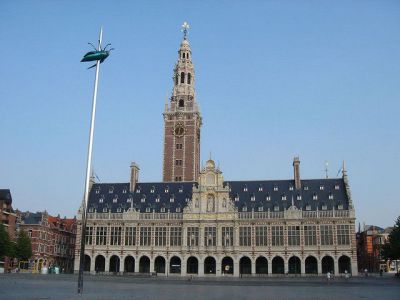 The Ladeuzeplein is a square in the center of Leuven, named after a former rector of the Catholic University Leuven, Monseigneur Paulin Ladeuze. The Ladeuzeplein is the largest square in Leuven. Until World War II it was called the Volksplaats or People's Place. Among the local population the square was known as the Clarisse. This name is derived from the Clarisse religious order who used to have a monastery at this location, when it still was a sandy hill.

In 1783 the monastery was abolished and the city of Leuven bought the estate from the Belgian authorities, who had inherited it, in order to establish a market dedicated to the sale of wood. The hill was leveled off and the first house on the square was erected in 1812. At this time the square was named Place Napoleon, later it was renamed the Volksplaats and eventually it became the Mgr. Ladeuzeplein.
Image by StaneStane on Flickr under Creative Commons License.
Sight description based on wikipedia