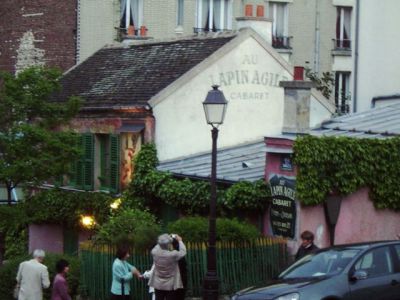 Lapin Agile is an informal cabaret venue established in 1850. It is situated in the center of the Montmartre district of Paris, near the Sacre Coeur Basilica. Originally called "Cabaret des Assassins" in the mid 19th century, it was named so because of a gang of murderers who burst into the building and killed the owner's son. With the passage of time, the name had changed to Lapin Agile.

In 1875, the artist Andre Gill painted a sign, featuring the rabbit jumping out of a pan, upon which the locals promptly took to calling it Le Lapin à Gill (Gill's Rabbit). At the end of the 19th century and the outset of the 20th, the Lapin was a favorite spot for artists and writers, such as Picasso, Modigliani, Apollinaire and Utrillo. Eventually, the name of the place has transformed to Cabaret Au Lapin Agile, by which it is still known today.

In 1905, Picasso captured the cabaret on his world famous oil painting, At the Lapin Agile. The picture sold at an auction in the 1980s for many millions of pounds, thus bringing the cabaret a great deal of fame. It is currently displayed at New York City's Metropolitan Museum of Art. Over the years, many other artists have captured the cabaret in their works, too.

For over one and a half centuries, Lapin Agile has been beaconing light on the northern slope of Montmartre. This somewhat strange looking, but lovely little house welcomes visitors with French songs, some of which date back to the fifteenth century. Its walls are covered with souvenirs, paintings, poems and testimonies.

Today, Lapin Agile is just as famous as it was in the past. Initials of its former patrons can still be seen carved out on the wooden tables. This authentic Parisian club is suitable for a family outing and is usually rather busy, so advance reservations are highly recommended.

A good variety of incredible singers and poets perform here live on a regular basis, sometimes taking as long as four hours per show, creating an incredibly warm atmosphere and making the time spent at Lapin Agile well worth remembering.