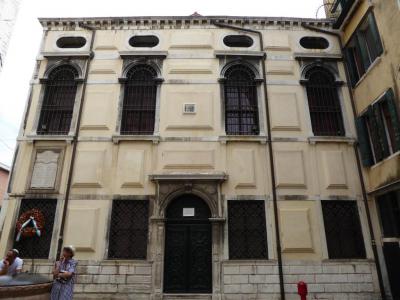 Constructed by the Jews arriving from the Eastern Mediterranean between 1538-61, the Levantine Synagogue is perhaps the only one that has retained nearly all its original features, with two simple facades interrupted by three orders of windows and a polygonal niche (a typical feature of Venetian architecture). Inside, the Scola was restored at the end of the next century by Andrea Brustolon from Belluno, the most famous wood sculptor working in Venice in that period.

In the Scola's entrance hall, enriched by a beautiful ceiling, one reads on two ancient tablets: “If you understand, oh, man, what your end in the world will be, and if you show charity discreetly, then when you depart this life your place will be assured: then your chalice will be full of goodness and on your head will be placed a crown” on the first, and, on the second, above the alms-box: “Donated by the Compagnia di Pietà e Misericordia”.

On the right is the Jeshivà Luzzatto ; a small, very fine study and Prayer Hall transferred here from its original seat and kept intact to this day. It is adorned with various poems praising God and forming with their initial letters the acrostic of Eliahu Aron Hazach. Various inscriptions added in recent times remind us that this prayer hall was chosen in 1950 to honor the martyrs of Nazism and Fascism. Over the portal one reads: “Blessed be he who enters, blessed be he who goes out”.
Image Courtesy of Wikimedia and Abxbay.