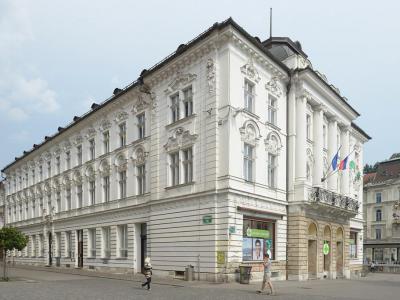 The Ljubljana Central Pharmacy is one of the most prominent buildings at Preseren Square, the central square of the Slovenian capital of Ljubljana. It is also known as Mayer Palace or Preseren Square 5 Palace.

The Neo-Renaissance building was designed in 1896–97 by Ferdinand Hauser and was built before the end of the century by Gustav Tönnies, whereas the façade was carried out by Filip Supančič. Until World War II, the building also housed a cafe, Preseren Cafe, named after the poet France Preseren (1800–1849). Today it houses the city's central pharmacy.
Image Courtesy of Wikimedia and Wolfgang Moroder.