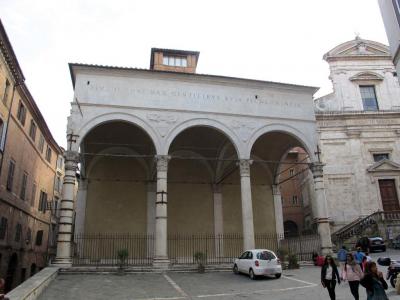 The Logge del Papa or Pope’s Lodge was built in 1462 and has undergone several restorations since. The Logge was designed by architect Antonio Federighi, who was commissioned to the project by Pope Pius II. The Pope himself was born and studied in Siena. He came from an old noble family of the city, the Piccolominis. His secular name, prior to becoming the Pope, was Enea Silvio Piccolomini. For several years he served as the Bishop of Siena. Whilst already the Pope, he remained greatly attached to his hometown Pienza, located in the province of Siena, and largely helped to improve its layout. It was Pius II who canonized Catherine of Siena as a saint. He is also the only Pope, so far, to have written an autobiography, called the Commentaries.

The Logge del Papa features a Renaissance style with three wide arches. The arches are supported by slender Corinthian columns that form an elegant colonnade. The design shows the severity quite typical of the region where it is located. Today, the building forms part of the city’s historic center. It stands near the family residence of Pope Pius II, the Palazzo Piccolomini, which houses the public archives of Siena.
Image by MarkusMark on Wikimedia under Creative Commons License.
Sight description based on wikipedia