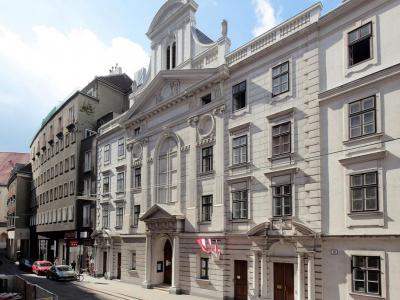 Lutherische Stadtkirche Wien or the Lutheran City Church has been through many changes since it was first built in 1582. At that time it was a Catholic monastery built at the behest of Elisabeth of Austria. She lived here after being widowed and it is speculated that the church was built to atone for the St. Bartholomew’s Day massacre.

During the religious turbulence of the 18th century, the church was abandoned. In 1783 the monastery was purchased and divided among the three new owners, the Lutheran Church, the Reformed Church and a private investor who used his portion to build a palace. At this time in Vienna’s history, Protestant churches were not allowed to have steeples or any exterior adornments that would denote that a church was there. The building was significantly altered during this time.

In 1876 the winds of religious fortunes again changed and Protestant churches could now look like a church. Significant modifications were again made to the building. WWII bombing caused significant damage to the Church and the building was again rebuilt with a new face. The latest renovations to the building occurred in the late 1980s with a return to the 1907 look.

Several features have survived all the remodeling and damage. Christ on the Cross is a copy of the van Dyke painting that is the altar piece. There are also marble plates that are relics from when the hearts of several leaders were buried here. The church has no aisles which makes it rather unique too. Located at Dorotheergasse 18, there are also other churches and sights to see within just a short walk.
Image by Politikaner on Wikimedia under Creative Commons License.
Sight description based on wikipedia