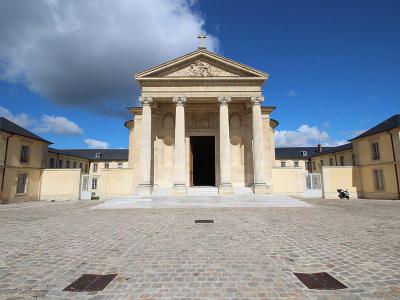 It was commissioned as a nunnery – the Convent of the Queen – by Queen Marie, the wife of King Louis 15th. It was begun in 1767 by Richard Mique and the nuns of the Order of the Canonesses of Saint Augustine were charged with the education of the female children of the Royal household’s officers and servants.

The queen used her own money from her inheritance and her husband gave her 11 acres of the former domain of Madame de Montespan. Mique’s plan was for a chapel with a parlor for the nuns to the right of the chapel with their cells above it and a teaching room on the left with dormitories for the pupils above. The queen died in 1768 and it was her daughter Adelaide who oversaw the completion of the building.

Between 1804 and 1807 the building was renovated and it opened as a high school. It was later expanded to receive middle school pupils. It was named in 1888 after the General Lazare Hoche.
Image by DDPAlphaTiger1 on Wikimedia under Creative Commons License.