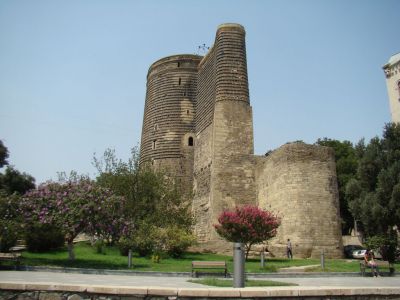 The Maiden Tower (Azerbaijani: Qız Qalası) or also known locally as Giz Galasi located in the Old City is an ancient tower with cultural affinity corroborating the presence Zoroastrians, Sassanians, Arabs, Persians, Shirvanis, Ottomans, and Russians. Built in the 12th century, as part of the walled city of Baku, the Maiden Tower, with the Shirvanshahs' Palace dated to the 15th century, are an ensemble of historic monuments. It is one of the most noted landmarks and Azerbaijan's most distinctive national emblems, and is thus featured on Azeri currency notes and other official letter heads.

The Maiden Tower houses a museum, which presents the story of historic evolution of the Baku city. It also has a gift shop. The view from the roof takes in the alleys and minarets of the Old City, the Baku Boulevard, the De Gaulle house and a wide vista of the Baku Bay. In recent years, the brazier on the top has been lit during the nights of the Novruz festival.

Consequent to the receding of the sea shore line of the Caspian Sea, a strip of land emerged. This land was developed between the 9th and 15th centuries, when the walls of the old city, the palace including the huge bastion of the Maiden Tower were built.
Image Courtesy of Wikimedia and داود مجتهدی.
Sight description based on Wikipedia.