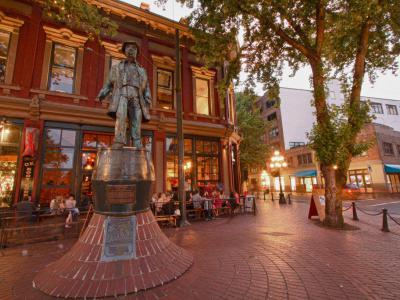 The intersection of Water, Powell, Alexander, and Carrall streets in Vancouver is a home to one of the most photographed and historic spots in the city, called Maple Tree Square. It dates back to the times when Vancouver was called Granville Townsite, and it gained popularity thanks to John Deighton, dubbed "Gassy Jack" for his talkative nature and penchant for storytelling, who opened the area’s first bar on the south side of Burrard Inlet in 1867 at the behest of his old buddy, Captain Edward Stamp, the owner of the Hastings Mill.

Legend has it that Deighton, native of England's Hull, had paddled over from New Westminster and promised mill workers that they could have all the whiskey they could drink if they helped him build a saloon. Within 24 hours, the “watering hole” was up and running. The proud owner later named it the Globe Saloon. Frequented by sailors and workers from the nearby sawmill, it soon proved to be the emerging city’s centre of trade and commerce, let alone drinking. Over the next four decades, some 300 bars had sprouted up within a 12 block radius.

The legendary bar was demolished when the townsite of Granville was established, but the name stuck and the surrounding area is now known as Gastown. As for Gassy Jack himself, the statue erected in his honour adorns Maple Tree Square today, marking the exact spot of his former saloon.
Image Courtesy of Wikimedia and Anthony Maw, Vancouver, Canada.
Sight description based on Wikipedia.