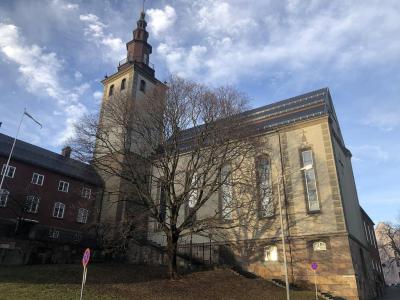 Currently housing a predominantly Swedish congregation, this elegant church still holds regular services, on Sundays and weekday evenings. The church is perhaps best known in Oslo for its efforts during World War 2. With Norway under attack from Nazi Germany, the church provided food to a large portion of the city’s population. It is believed that over 7000 people came to St. Margaret’s each day for food – most famously, the low cost ‘Swedish soup’ which the church regularly served to the hungry citizens of Oslo. The church building is also known for its excellent acoustics, and choral recitals are often held here as a result.
Image Courtesy of Wikimedia and Ssu.