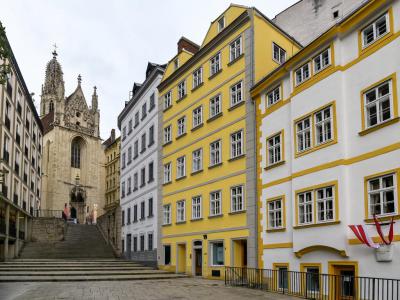 Maria am Gestade (English: Mary at the Shore) is a Gothic church in Vienna. One of the oldest churches in the city - along with St. Peter's Church and St. Rupert's Church, it also is one of the few surviving examples of Gothic architecture. Located in the Innere Stadt at Salvatorgasse 12, near the Donaukanal, the church was traditionally used by sailors on the Danube river. The name reflects the former location on the Fluvial terrace of an arm of the Danube river, prior to its regulation.

The church's most striking characteristic is the 56 m (180 ft) high open work tower, built in 1419-1428 in Gothic scroll-work. It is recognizable from a great distance and is depicted on the oldest images of the city. The choir, whose construction began in 1330 contains two high Gothic panels. The windows contain surviving fragments of medieval stained glass. The nave due to the limited space, is narrower than the choir. Because of the course of the Danube arm the nave is slightly bent. Construction was started in 1400, and it is said that Duke Albrecht III himself was the builder.

The church has three porticoes that are decorated with reliefs and figures. The choir door shows a Virgin of Mercy and a Coronation of the Virgin, both dating from around 1350, as deduced from during the Middle Portal which has realistic depictions of angels playing musical instruments. On the main portal on the west facade, canopies crown reliefs of the two Saint Johns (Baptist and Evangelist) from about 1410, in a style also seen at Prague's St. Vitus Cathedral and a range of sculptures and mosaic decoration, which date from the 20th century.
Image by Jorge Franganillo on Flickr under Creative Commons License.
Sight description based on wikipedia