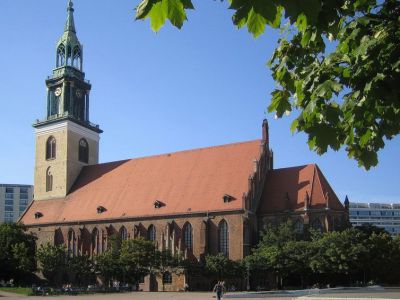 Converted to a Lutheran Protestant church from its Roman Catholic denomination, Marienkirche together with Nikolaikirche are said to be the oldest churches in Berlin, dating back to the late 13 century. The unpretentious combination of architectural styles somehow makes it one of Berlin's most appealing churches, its simplicity a reminder of the city's village origins. If you like photography, there is a good spot with a fountain layout (not the Neptune Fountain) in the square right behind the Fernsehturm (TV tower) where you can get a perfect reflection of the church on water. Also on the roadside of the Church, take a look at the striking statue of Martin Luther, his right hand touching one of the pages of the Bible as if saying his now-famous phrase, "by faith alone".

The interior – an excellent place to escape the buzz – is rather austere Gothic with a few remarkably Baroque embellishments, in particular the pulpit, crowded with elaborately-carved cherubs blowing trumpets, and the baptismal with its legs formed from three black dragons. In terms of carving and gilding, the restored organ with old gilded ﬁligree tops it all off, and the rousing recitals (by donation, on Thursdays and Fridays) are a real treat, with people frequently being invited to view the 18th-century instrument close up.

Just inside the entrance, the 22m-tall frieze, "The Dance of Death" commemorating the plague epidemics of the Dark Ages is currently being restored and not available for public viewing. On completion of its restoration, the church will be an unmissable stop for any traveler to Berlin.
Image Courtesy of Wikimedia and Manfred Brückels.

Known for its turbulent past, today's German capital is a global city for international affairs, creative industries, popular media and diverse cultural tourism. The first written records of settlements in the area of present-day Berlin date from the late 12th century, when the region came under German rule as part of the Margraviate of Brandenburg, founded by Albert the Bear in 1157. Berlin...  view more