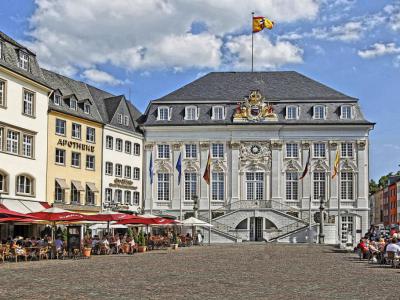 Built in the 11th century, Marktplatz has been the center of daily trade in Bonn ever since. Dominating the busy square is the Marktfontaine, also known as the Obelisk, standing in the center. The market square also houses a number of historic buildings, including the Baroque-style city hall and the famous Em Höttche restaurant, established in 1389, which went down in history as the place where Elector Gebhard Truchsess of Waldburg celebrated wedding with Agnes Gräfin von Mansfeld on 2 February 1583 which ultimately led to the outbreak of the so-called "Cologne War".
Image by Hans Weingartz on Wikimedia under Creative Commons License.
Sight description based on wikipedia

Bonn, beside having an incredible variety of attractions for grown-ups, offers an accordant number and selection of places to visit for children of all ages and personalities. The attractions will offer kids not only positive impressions, but will also provide them with much useful information. Take the present guided tour to give your children a day full of pleasant memories to take back home.