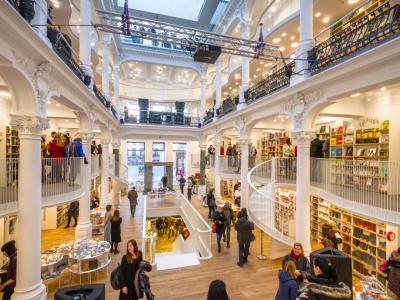 The Memorial of Rebirth in Bucharest commemorates the struggle and victims of the Revolution of 1989 which saw the end of Communist rule in Romania. The memorial complex was inaugurated in August 2005 and is located in Revolution Square, the place where Romania's Communist-era dictator, Nicolae Ceauşescu, was publicly overthrown in December 1989.

The memorial, designed by Alexandru Ghilduş, features as its centrepiece a 25-metre-high marble pillar reaching up to the sky, upon which a metal "crown" is placed. The pillar stands amid a 600 m² plaza covered in marble and granite. Its initial name was the "Eternal Glory to the Heroes of and the Romanian Revolution of December 1989" (Glorie Eternă Eroilor şi Revoluţiei Române din Decembrie 1989). The name alludes to Romania's rebirth as a nation after the collapse of Communism.

Despite a commonly-acknowledged need for a memorial commemorating Romania's 1989 revolution, the monument - mainly its design - sparked a great deal of controversy when inaugurated in 2005. Many artists stated that the memorial, especially its central pillar, was devoid of any symbolism, being too abstract, and thus didn't adequately represent the suffering and magnitude of the 1989 revolution, which claimed nearly 1,500 lives. The placement of the memorial was also criticized and the Urbanism Committees of both the 3rd Sector of Bucharest and that of the entire city rejected the design, although they acted merely as official consultants and the memorial was erected anyway. Owing to its relative unpopularity, the monument is guarded round-the-clock, but despite this, on the night of 12 May 2006, it was vandalized. A stencil graffiti figure representing the fictional revolutionary character "V" was drawn on the side facing the National Museum of Art.
Image by Jim under Creative Commons License.
Sight description based on wikipedia