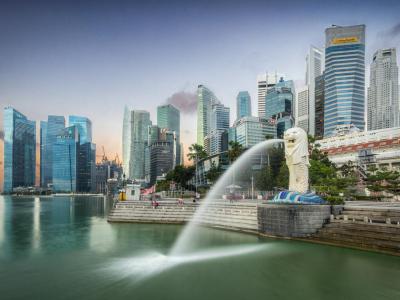 No tour of Singapore is complete without seeing the Merlion and the small park surrounding it that caters well to the tourists visiting the city. An imaginary creature, half fish and half lion, the Merlion has been used as a mascot and national personification of Singapore since 1964. The fish body symbolizes Singapore's humble beginnings as a fishing village back in the day when it was called Temasek, while the lion's head, on the other hand, stems from the old tale about the city's present name “Singapura” which translates from Sanskrit as the "Lion City".

Curiously enough, lions with fishtails can also be found on murals at Ajanta and Mathura in India, as well as on Etruscan coins of the Hellenistic period. Merlions, or ‘heraldic sea-lions’, are an established element of Western heraldry, and have been used on the coat of arms of the cities of Portsmouth and Great Yarmouth in the United Kingdom, as well as the City of Manila and the East India Company.

While being one of Singapore's most kitschy of attractions, sitting near this 9-meter statue, that spouts water from its mouth, does provide commanding views of the Marina Bay area, as well as of the city skyscrapers and the Singapore Flyer (if standing on its right). If you’ve already been to Raffles and got yourself a Singapore sling, well, a trip up the Merlion is the next logical step.

It can get really busy here but people come and go quite quickly so, with a little patience, you're bound to get a good shot of the statue. Better yet, try to enjoy the location more rather than worry about the perfect picture, and this place will definitely hit the spot.
Image by hams Nocete on Wikimedia under Creative Commons License.

The Colonial District was founded by Sir Thomas Stamford Raffles on the east bank of the Singapore River. There are monuments that are recognized all over the world as symbols of Singapore and they evoke the city-state's rich historical past. This self-guided tour will lead you to the most famous national monuments of the Colonial District:

For centuries, the island city-state of Singapore has been a melting pot of Asian cultures: Chinese, Indian, Malay and Arab, prompting men and women from various parts of the continent to come and make it their home. Legacy of that fusion lives on today in the harmony of a multicultural society, making Singapore a one of a kind tourist destination which offers visitors a truly unforgettable...  view more

Singapore's culture is a combination of Chinese, Hindu, Arab and other cultures. People living in Singapore are immigrants from different parts of the world. This self-guided tour will lead you through the Colonial District also known as the Civic District, where you can see how these different cultures were integrated to make up this city-state's culture.