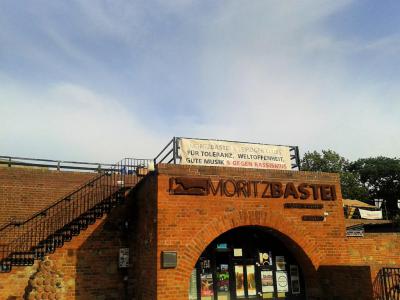 The Moritzbastei is the only remaining part of the ancient town fortifications of Leipzig. Today it is widely known as a cultural centre. The Moritzbastei was built as a bastion in between 1551-1554 under the supervision of the mayor Hieronymus Lotter, who was also responsible for Leipzig's Altes Rathaus (old town hall) which is one of the most important Renaissance buildings in Germany. After being stormed for the first time in the Thirty Years War, the Moritzbastei lost its military function in the Seven Years War. Henceforth it served as a store for trade goods and workplace for a bell founder and a book printer.

In the period 1796-1834, the first public school was built over the basement of the Moritzbastei. It was the first school in Germany without confessional segregated classes and was destroyed in 1943 during World War II. From 1974 the Moritzbastei was rebuilt under the supervision of the University of Leipzig. More than 30,000 students were engaged in the reconstruction of the bastion, among them the recent Chancellor of Germany, Angela Merkel. From 1982 onwards the Moritzbastei was the official students club of the University of Leipzig.
Image by GothEric on Flickr under Creative Commons License.
Sight description based on wikipedia