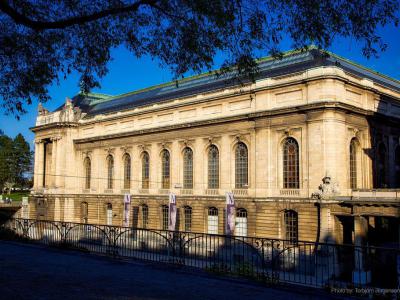 The largest art museum in Geneva was built at the beginning of the 20th century. Its Fine Art section has paintings from the Middle Ages to the 20th century, with works by the Italian, Dutch, French, English, Genevan and Swiss Schools. The best-known painting is 'The Miraculous Draught of Fishes' (1444) by Konrad Witz, contained in Witz's St. Peter Altarpiece. Other major artists include Rembrandt, Cézanne, Modigliani, and the sculptor Rodin. The museum also has numerous works by Jean-Étienne Liotard, Ferdinand Hodler, Félix Vallotton and Jean-Baptiste-Camille Corot. The collection of works by the Genevan Neoclassical painter Jean-Pierre Saint-Ours (d. 1809) is much the best of any museum.

The Applied Art section has collections of Byzantine art, icons, weapons from the Middle Ages and Renaissance, silverware and tinware, musical instruments and textiles. The complete interior furnishing and wood panelling from several rooms of the Lower Castle Zizers (late 17th century) have been built into the museum.

The Archaeology section displays findings from European prehistory, ancient Egypt (with a mummy from the 9th century BC), the Kerma culture of Sudan, the Near East, ancient Greece, and Roman and pre-Roman Italy, as well as a numismatic cabinet.

Geneva’s spiritual life boasts a great number of religious sites that are of historic and cultural value to the city. The city is also the place where the reformist movement started to grow, having theologian Jean Calvin as its leader. Take this tour, whether you are a keen church goer or simply interested in places of spirituality, and visit the most important religious sites of Geneva.