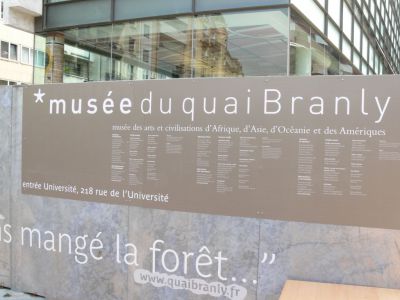 Situated close to the Eiffel Tower, the Musée du Quai Branly is a museum dedicated to the art, cultures and civilizations of Africa, Asia, Oceania and the Americas. In English it is known as the Quai Branly Museum or MQB, for short. The name derives from the location which, in turn, is named after the physicist Edouard Branly. The most unusual feature of the Branly building is the 8,600 square foot vertical garden one side of which appears as a woolly animal. Architect, Jean Nouvel, designed the building and Patrick Blanc came up with the idea of and planted the "living wall" (200m long by 12m tall) as part of the exterior. Patrick Blanc’s hydroponic Vertical Garden System, known in French as Le Mur Vegetal, allows plants and buildings to coexist peacefully.

Implementing the living wall was a huge undertaking and cost an estimated hefty $266 million. President Jacques Chirac announced the project in 1996. Creation of the museum required that two respected French museums gave up their collections. This sparkled a hot debate among curators, anthropologists and art historians. The biggest challenge was to combine diverse items, such as a mask from New Guinea, a Nepalese bronze Buddha or a terracotta jar from Central America, in the best possible manner. The Musée du Quai Branly contains collections of the now-closed museums, featuring 267,000 objects in its permanent collection, of which only 3,500 items are currently on display. The museum embraces several buildings, a multimedia library and a garden. Its frontage, facing Quai Branly, features very tall glass paneling which affords passers-by a spectacular view of the interior gardens from the outside.