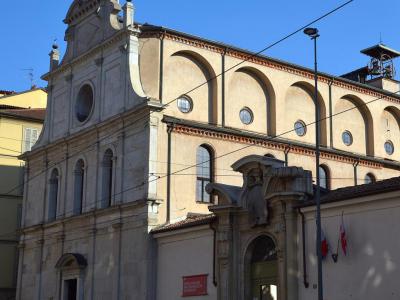 Museo Civico Archeologico is a small and fascinating museum that reveals information about the Milan during the era of Roman Empire. It shows how Milan unexpectedly became the capital of the empire in the fourth century A.D.

The museum has some unique masterpieces of art in its collections. The most important of which include the Trivulzio's cup, a rare example of intact diatret glass from the Roman times; patera from Parabiago, beautiful example of silverware of the late Roman Empire and the art from Gandhara, the region between India, Pakistan and Afghanistan. The building of the museum is also very interesting as it has been constructed inside the structures of the Roman Circus. Remains from the Roman times can be seen present all around the museum.

The Municipal Archeological Museum has its home in the Benedictine Monastery since the 1960s. Established through a merger of the Brera Archeological Museum and the Municipal Art Museum, it houses items from the rich numismatic collection of Greek, Italian and Etruscan masterpieces. All the documentation of sculptures, ceramics and mosaics dating from the prehistoric to the modern age are housed in there. It has an interesting section of the items excavated from Palestine along with a complete section showing historic treasures from the Necropolis of Lovere. The Archaeological Museum is also famous for its rich scientific activity and for its accurate publications on the collections it houses.

A visit to the museum will give you a real insight into the history of the Milan during the Roman Empire.