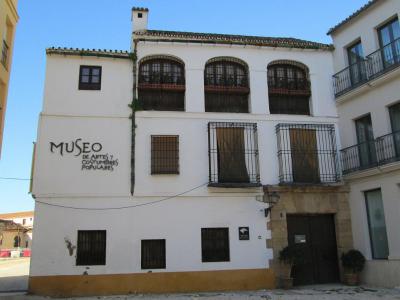 The Popular Arts Museum in Málaga is an ethnographic museum that showcases traditional arts and crafts from the 18th, 19th and 20th centuries. The rural and urban lifestyles of the people in the city through the ages are depicted through the exhibits at the museum.

The museum is in a large house called the Meson de la Victoria. The building was constructed by the Franciscan monks of the convent of Victoria in 1632. Like most houses in the 17th century, there was a central patio with rooms around. There are 19 exhibition rooms on two floors. Each room has exhibits that show the lifestyle of the people in different eras and their traditional occupations at the time.

Exhibits include tools and implements used by seafarers, carpenters, ironworkers, lace makers, wineries, bakers and harnesses used by farmers and transporters on their beasts of burden. There are two portraits of Anita Delgado, a poor girl from Málaga who became a princess of the erstwhile State of Kapurthala in India. There is an interesting set of clay figures showing people carrying out different types of trades. Another collection has posters and raisin boxes with women in different traditional costumes from the region around Málaga.

Why You Should Visit:
Interesting exhibits in lovely typical Andalusian style house and, of course, a patio to sit and relax away from the heat.
The collection is well-displayed and with just enough info in Spanish & English to take you back into the 19th century.

Tip:
Children would love it here, but the more religious art is perhaps a bit too dark for younger kids.