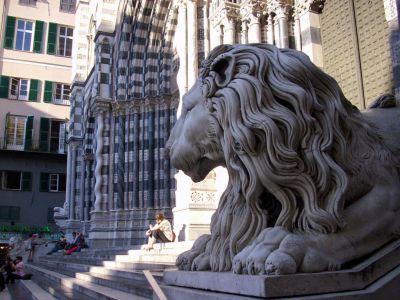 The treasury museum is located in the San Lorenzo Cathedral. The Cathedral Treasury established a collection of objects in the twelfth century and expanded in later centuries through official grants and private contributions, also from war trophies. It became a museum in 1892, when it was decided to give this precious stable heritage, making it visible to the public at all times. After World War II, in the courtyard of the Archbishop's Palace behind the cathedral, an entirely new underground environment was developed, intended specifically to cater to the museum, which opened in 1956. The overall effect is fascinating, not only for the strength and novelty of conception, but also for the variety and complexity of cultural references and types.
Image by Alessio Sbarbaro on Wikimedia under Creative Commons License.

This sight is featured in a self-guided walking tour of Genoa, Italy within the mobile app "GPSmyCity: Walks in 1K+ Cities" which can be downloaded from iTunes App Store or Google Play. Please download the app to your mobile phone or tablet for travel directions for visiting this sight. The app turns your mobile device to a personal tour guide and it works offline, so no data plan is needed when traveling abroad.

A Tour of Genoa Religious Edifices