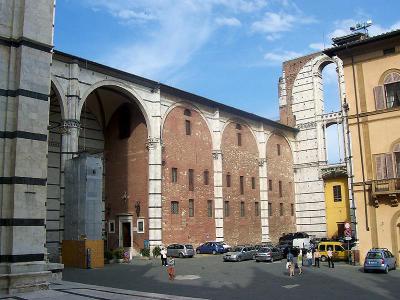 The Museo dell'Opera del Duomo houses the art treasures of the Cathedral of Siena. It is one of the oldest private museums in Italy.

In the year 1339, Siena was one of the wealthiest cities in Italy. At the time there were plans to extend the cathedral structure to make it one of the biggest in the world. Construction had started when the plague epidemic that swept across Europe killed almost two thirds of the population of Siena in 1348. As a result, the new nave remained unfinished. The Museo dell'Opera del Duomo was established in 1879 in the walled up right aisle of the unfinished new nave of the cathedral. It has an impressive collection of religious art and sculpture by well known Sienese artists.

Treasures at the Museo dell'Opera del Duomo include Sienese religious sculpture which was to have adorned the façade of the unfinished structure, stained glass windows by the artist, Duccio di Buoninsegna, tapestries and manuscripts. A separate air conditioned room houses the Maesta altarpiece also by Duccio di Buoninsegna which is the treasure of the museum. When the artist finished the piece in 1311, it is said that it was carried in procession to the cathedral by the clergy, statesmen and townsfolk. Visitors can climb the stairs on to what was planned to be the façade of a new cathedral in 1339 and get spectacular views across Siena.
Image by Gaspa on Flickr under Creative Commons License.
Sight description based on wikipedia