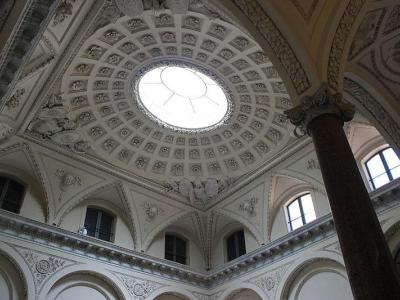 Those visiting the Museum of Rome in Palazzo Braschi should prepare for a double treat – the museum itself and the elegant Neoclassical palace which is an attraction in its own right. The first thing one sees at the entrance, standing on the side of an imposing staircase, is the sculpture of Jupiter, the Thunderer.

The museum collection spans several centuries of Roman history, starting from the Middle Ages until the first half of the 20th century. It gives a good understanding of the changing city through collections that include paintings, engravings, furniture, ceramics, and photos.

While part of the exhibition details historical facts, the other part is dedicated to all kind of people who lived in Rome and their life stories.

A particular attention deserves the recently refurbished 3rd floor, featuring perhaps the most comprehensive and significant of all the museum's exhibits. It tells the story of the palace itself recounting, among other periods, years under Mussolini, during which the exterior was covered in Fascist banners, the post-war period when some 300 impoverished Romans moved in here desperate for shelter, and more. For visitors convenience, there's an audio guide presented in both Italian and English.

The photography exhibition is also important to see, as its focus adds symbolic value to Rome as the place of Christianity "par excellence".