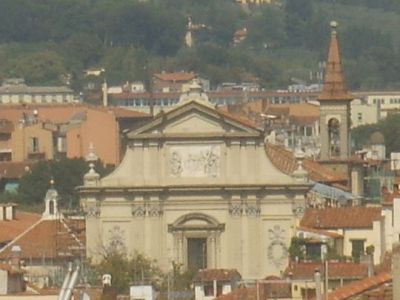 San Marco is the name of a religious complex in Florence that comprises a church and a convent. The convent, which is now a museum, has three claims to fame. During the 15th century it was home to two famous Dominicans, the painter Fra Angelico and the preacher Girolamo Savonarola. Also housed at the convent is a famous collection of manuscripts in a library built by Michelozzo.

The present convent occupies the site where a Vallombrosan monastery existed in the 12th century, which later passed to Benedictine monks of the Silvestrine line. In 1435 the Benedictines were replaced by Dominicans from the Convent of San Domenico in Fiesole. Two years later, they appealed to Cosimo de' Medici the Elder, who lived nearby in the family palace, now known as the Palazzo Medici-Riccardi, to fund the renovation of the entire complex. The works were entrusted to Michelozzo. Each cell of the monks' cloister and many other walls were decorated by Fra Angelico in collaboration with others, including Benozzo Gozzoli. Cosimo de' Medici had a cell at the convent for his personal retreat.

San Marco is famous as the seat of Girolamo Savonarola's discourses during his short spiritual rule in Florence in the late 15th century.

Why You Should Visit:
Extensive sacred art collection that leaves a lasting impression, particularly if you have an interest in the genre transition at the end of the Gothic and beginning of the Renaissance periods.

Tip:
The museum is inexpensive to visit (only €4) and is covered by the Firenze Card as well.
Make sure you check out the galleries & the cells on the top floor as these can be easily missed.