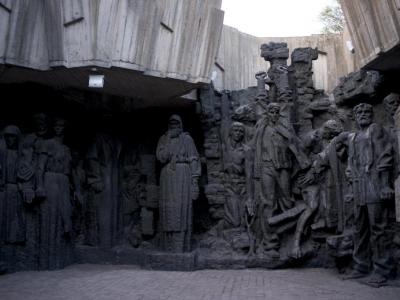 The National Museum of the Great Patriotic War of 1941-1945 is a 10 hectare complex dedicated to the history of war of the Soviet Union against Nazi Germany. The museum displays weaponry used in the battles and the battle scenes themselves, including the invasion of the Nazis, the Soviet resistance and the ultimate expulsion of the invaders from the Soviet territory. The famous Battle of the Dnieper is immortalized here in the sculptures placed along the museum’s alleys.

The idea of having such a place was first articulated in 1943, but it wasn't until the 1970s that it finally materialized. The exhibition, called The Partisans of Ukraine in Their Fight against Fascist German Invaders (1946), is considered to be the museum's predecessor. In the 1950s the collection was placed at the History Museum and remained there until 1974, when the former Klovsky Palace was designated to hold it. In 1981, the collection, along with other exhibits related to World War II, was moved to the newly established Museum of the Great Patriotic War of 1941-1945. In 1999, the museum was granted a national status and today boasts over 300,000 exhibits.

The building features a spacious exhibition hall, topped by a 62 metre statue. The latter, known as the Mother Homeland, depicts a woman holding a sword and a shield with the Soviet national emblem on it, and is a key landmark on Kiev’s skyline.