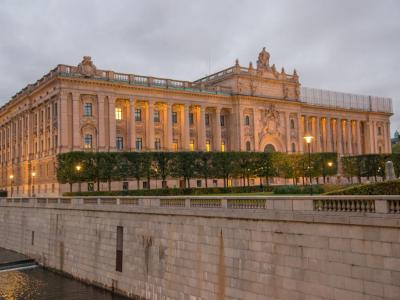 The Museum of Medieval Stockholm (Stockholms Medeltidsmuseum) is a distinctive gallery with an exceptional story. Centrally located north of the Royal Palace, it came to be thanks to the wealth of discoveries unearthed during an extensive archaeological dig (dubbed Riksgropen, "National/State Pit" because of its depth and magnitude, involving over 50,000 meters of soil) in 1978-80. In order to make the finds accessible to the general public, a planned subterranean garage on the site gave way to the museum, inaugurated in 1986. This state-of-the-art facility, designed by artist Kerstin Rydh, received both national and international acclaim and won the European Museum of the Year Award in 1986.

The museum enables visitors to experience medieval Stockholm. The exhibit contains over 850 objects and artifacts – brick houses and booths, workshops, harbour, and gallows – mapping out the history of the Old Town area all the way back between the 1250s and the 1520s. Part of the exhibit consists of the Town Wall built in the 1530s by Gustavus Vasa. In 2010, to celebrate 800 years since the birth of Birger Jarl, founder of Stockholm, the museum opened an exhibition with a reconstruction of his face.

The Museum of Medieval Stockholm produces theme exhibitions with a medieval emphasis and arranges lectures, symposia and programmes. It engages in broad educational activities, in which children, youth and schools are a key target group. The museum has a shop that sells books relating to the Middle Ages, as well as postcards and jewelry.

Why You Should Visit:
Engaging exhibits and preserved archaeological remains – you can almost “smell” the old times!
Much larger on the inside than it appears; displays are described in both Swedish and English.
Kids would really love this – there are a number of exhibits designed specifically for them.

Tip:
For a minimal fee, the museum offers multilingual audio tours in English, German and French.