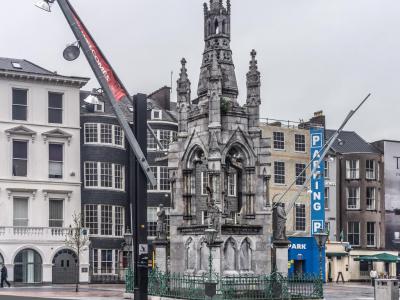 Bearing a stark resemblance to the Holy Trinity Church is the National Monument that stands statuesquely on the Grand Parade Street. Unveiled in 1906, the monument stands as a tribute to all the great Irish patriots and martyrs involved in the revolts of 1798, 1803, 1848 and 1867.

The foundation stone for the monument was laid on 2nd of October 1898 by the Mayor of Cork, Patrick Meade. The monument was chosen to be erected at the junction of Grand Parade and South Mall that was previously occupied by the statue of George II. Despite the foundation stone being in place since 1898, it was only 4 years hence that the building started taking shape. Fundraising for the monument proved very difficult and the locals were regarded as disrespectful and indifferent towards the country’s patriots and independence struggles.

Nevertheless in 1902, the job of designing the monument was given to the famous architect, D.J Coakley and John Francis Davis was asked to sculpt the figurines on the monument.

The design of this monument is early Irish Gothic styled. It is adorned with statues of Wolfe Tone, Michael Dwyers, Davis and O’Neill Crowley at the four corners of the monument and in the center, under the canopy is the eight feet high statue of Erin.
Image by Katie Farragher15 on Flickr under Creative Commons License.