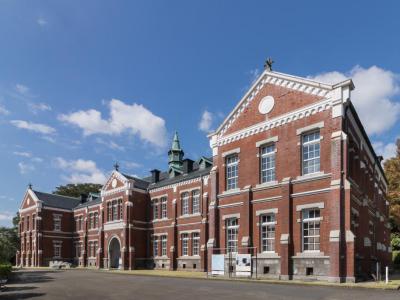 The Crafts Gallery is an annex of the National Museum of Modern Art in Tokyo. It was opened in 1977 with a view to display the living treasures of the country which are its traditional crafts.

The Crafts Gallery occupies a building that was once the headquarters of the Imperial Guards. It was designed in 1910 by military engineer, Yasushi Tamura. In 1972, the building became a designated Significant Cultural Property and in 1977, it became the Crafts Gallery extension of the National Museum of Modern Art. The present gallery was designed by Yoshiro Taniguchi.

The collection at the Crafts Gallery features objects from the Meiji era to the present day. It has textiles, ceramics, glass, dolls, lacquer, wood, bamboo, metalwork, industrial and graphic design. There is a section on the growth and diversification of Japanese crafts in the post World War II era. The collection portrays crafts made using traditional techniques in new contemporary creative designs. It also hosts themed exhibitions like the History of Japanese Modern Crafts Exhibition and large scale shows once or twice in a year. Crafts from other parts of the world dating from the 19th century are also featured. It is a research facility and has its own research library.