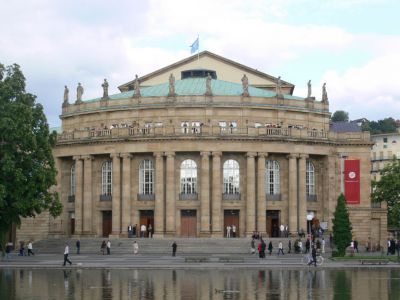 The Staatstheater Stuttgart is an opera house in Stuttgart, Germany. It is also known locally as the Grosses Haus, having been the larger of two theatres in the former Königliche Hoftheater. Designed by the noted Munich architect, Max Littmann, who won a competition to create new royal theatres, it was constructed between 1909 and 1912 as the Königliche Hoftheater, a royal theatre of the Kingdom of Württemberg with a Grosses Haus and a Kleines Haus. In 1919, the theatres were renamed the Landestheater, and later, the Staatstheater. The Small House was destroyed by bombing during the Second World War and today, the site is occupied by a new Kleines Haus, which opened in 1962.
Image by Andreas Praefcke on Wikimedia under Creative Commons License.
Sight description based on wikipedia