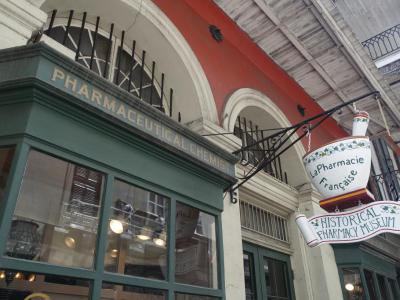 One might find it odd that a pharmacy is a national landmark. But, the New Orleans Pharmacy Museum is no ordinary museum. It holds the distinction of being the site of the first pharmacy in the United States. Opened in 1823 by J. Dufilho, the first licensed pharmacist in the United States, the museum allows one to take a step back into the days of the past.

There are many items you will see when you visit, such as live leeches, apothecary jars, medical instruments, eyeglasses, wooden blenders, bloodletting devices, and prescription files. There is even a pharmacist’s work area that displays the microscope, mortal, and pestle that the doctor used to make his medicines. The nearby garden shows the herbs that were a part of the many prescriptions that the doctor wrote. There are literally hundreds of items to look at and discover. In addition, the display of New Orleans epidemics is fascinating.

In 1950, the pharmacy became a museum. In 1987, budget cuts almost caused the museum to close its doors. Luckily, a non-profit group known as the “Friends of Historical Pharmacy” took over the financial responsibility of the museum and saved the day.

Why You Should Visit:
To learn about the history of NOLA via medical history, health habits and beliefs of NOLA people; soda origin, old medical quackery, and much more.

Tip:
Get there just before 1 PM to take the one-hour 'tour' in the style of an entertaining lecture/presentation (Tuesday through Friday, for the same price as the self-guided tour but so much better).

For most of the people living in New Orleans, the Central Business District is just a crowded area home to skyscrapers, malls and casinos. However the district is also home to a large number of heritage sites, including some well-known museums. The tour below takes in the cultural side of the Business District.