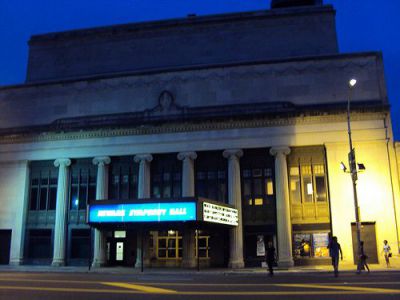 Newark Symphony Hall at 1020 Broad Street was built in 1925 and added to the National Register of Historic Places in 1977. It was known for many years as The Mosque Theater. Originally built by the Shriners at a cost of more than $2 million as Salaam Temple and colloquially known as The Mosque, the four-story building has been Newark Symphony Hall since 1964.

The interior features a Greek and Egyptian motifs, marble columns, a crystal chandelier, gold-leaf fret work and two-columned side promenades. The neo-classical building was design by Frank Grad, a prominent Newark architect, whose work includes the Lefcourt Newark Building and many others downtown. The 3,500-seat main concert hall is named for Sarah Vaughan, a native Newarker, and is renowned for its acoustics. Newark Stage is a 200 seat black box theater used by theatrical productions. The Terrace Ballroom is used for receptions. The Studio is a rehearsal space. The Dance Studio is home to one of three facilities in the state used by the school of the Garden State Ballet, founded in 1951.
Image by pasa47 on Flickr under Creative Commons License.
Sight description based on wikipedia