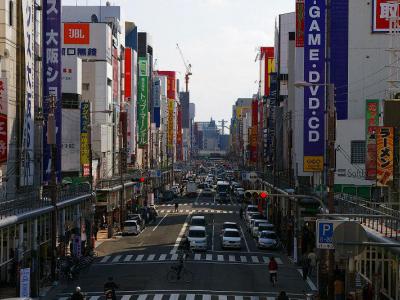 The Nipponbashi Den Den Town area located in the Naniwa Ward of Osaka is a popular shopping destination among tourists. A range of electronics, Otaku or Japanese comic related and other products are sold here.

During the Edo period there was a theater at the location called the Nagamachi. The Osaka Municipal Government later changed its name to Nipponbashi. After the Meiji restoration, several shops selling second hand books opened their doors here. The area was called Den Den Town after World War II when many electronics shops opened in Nipponbashi. With the establishment of two large electronics chain stores in Umeda and Namba, the street lost its popularity among customers until recently when the shops started selling Otaku and anime related products.

Shops at the Nipponbashi Den Den Town sell a range of products like electronics, household appliances, lighting, personal computers, video games, Cd players and cameras at affordable rates. Unlike other markets in Osaka, customers can bargain and get products at a lower price. Tax and duty free shops are also located here and tourists who bring their passport can get a good deal on products. There are Maid and Cosplay cafés where maids or waiters in costumes serve customers. Full service sit down cabarets are also located here.
Image by Inoue-hiro on Wikimedia under Creative Commons License.