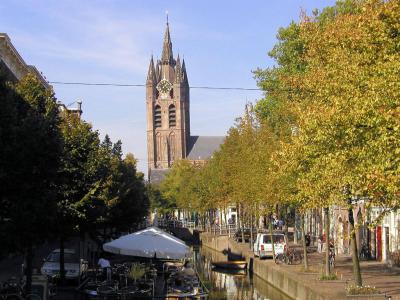 The church possesses three pipe organs, from the years 1857 (main organ), 1873 (north aisle) and 1770 (choir). The most massive bell in the tower, cast in 1570 and called Trinitasklok or Bourdon, weighs nearly nine tonnes, and because of its strong and potentially damaging vibrations, is rung only on such special occasions as the burial of a Dutch royal family member in the nearby New Church. The massive bell is also sounded during disasters, when local air-raid sirens are sounded. This, however, does not happen during the siren's monthly, country-wide test, which happens every first Monday of the month.
Image by ja_macd on Wikimedia under Creative Commons License.
Sight description based on wikipedia