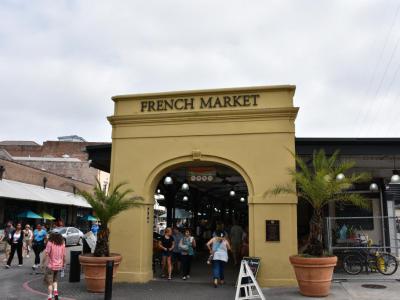 The Old French Market was a major food market for 180 years in New Orleans. People came from far and wide to enjoy the delicious and fresh foods, aroma, and atmosphere. It is one of the oldest public market buildings in America. The original market was located at the Café du Monde site near Jackson Square and was constructed by the Spanish during colonial times to provide a safe and clean place to purchase food. In 1811, a new building was constructed only to be destroyed by a hurricane the next year. The current building was rebuilt in 1813 and survives to this day, albeit with several modifications.

Often called Halle des Boucheries, or the Meat Market, by the locals, the shopping center was the only place where meat could be legally be purchased. The French Market became so popular that it eventually contained a vegetable market, fruit market, a dry goods emporium, and a coffee stand. The market almost came to an end in the 1970s when the City removed most of the produce from the site. The French Market Corporation rebounded by illustrating its glorious past while opening clothing stores, gift shops, and restaurants. One of the best features of the market is the flea market that is open daily from 7 am to 7 pm where clothing, jewelry, arts, crafts, and other items are sold.

Tip:
Though it is filled with many of the usual market fare from around the world, there are local artists in this market as well, so make sure you look for them. Their wares are reasonably priced and are great souvenirs! Just make sure you bring cash as not all of the booths accept cards.

New Orleans has some of the oldest and the most beautiful churches in Louisiana. Some of them, like St Louis Cathedral, have become iconic symbols of the city, others are considered to be "fresh air" to the busy business quarters. The churches here combine different architectural styles. The tour below includes some exquisite examples of places of worship in New Orleans.