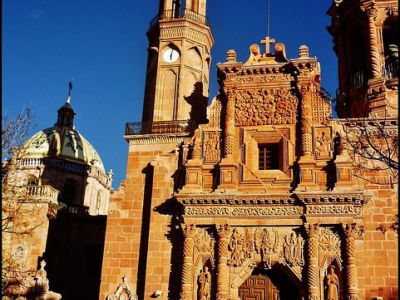 Our Lady of Guadalupe, Santa Fe

Our Lady of Guadalupe also the Virgin of Guadalupe is a Roman Catholic icon of the Virgin Mary. The tradition relates that on 9 December 1531, Juan Diego, a recently converted Aztec peasant, had a vision of a young woman, a lady, while on a hill in the Tepeyac desert. The lady in the vision asked him to build a church where they stood on the hill.

The tilma icon is displayed in the Basilica of Our Lady of Guadalupe, which is among the most-visited Marian shrines in the Roman Catholic religious world. The icon of the Virgin of Guadalupe is Mexico’s most popular religious and cultural image, it appears bearing the titles: the Queen of Mexico, the Empress of the Americas, and the Patroness of the Americas. Throughout the Mexican national history of the 19th and 20th centuries, the Guadalupan name and image have been unifying national symbols; the first President of Mexico (1824–29) changed his name from José Miguel Ramón Adaucto Fernández y Félix to Guadalupe Victoria in honor of the Virgin of Guadalupe.