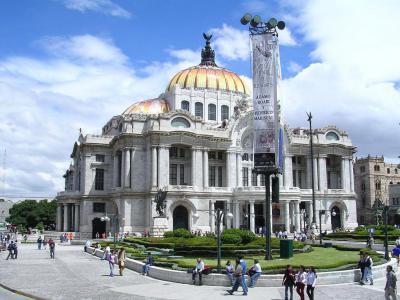 The majestic Palacio de Bellas Artes is one of the city's finest buildings and a highly respected cultural institution that hosts live performances and art exhibitions overseen by the Mexican Institute of Fine Arts. Directed by Italian architect Adamo Boari, construction on the palace began in 1904 but halted when the Mexican Revolution erupted in 1910. Twenty years later, architect Federico Mariscal took over the project, completing the rooftop cupola and the building's interiors in Art Deco style. In the opulent main auditorium, a stunning Tiffany glass curtain, stretching up 200 feet or more, was designed by Mexican artist Dr. Atl. Even if you don't see a show, you can tour the auditorium.

On the 2nd and 3rd floors, the Museo del Palacio de Bellas Artes has hosted some of the most important art shows of the past decade, including a 2007 Frida Kahlo retrospective. Admission includes access to the Palacio's many murals, which features David Alfaro Siqueiros' "Nueva Democracia" on the 2nd level. On another wall, Diego Rivera's 1934 "El Hombre Contralor del Universo" (known as "Man at the Crossroads" in English) was originally commissioned by Nelson Rockefeller, though, famously, the business magnate canceled the project when Rivera included a likeness of Lenin in the piece.

Why You Should Visit:
A wondrous building / concert hall – great for exploring the murals, art exhibitions, or watching the famed Ballet Folklórico which performs in the theater every Tuesday and Sunday, and showcases traditional dances and music from across Mexico.

Tip:
If you want to see the Tiffany "glass curtain", you can join a tour provided for free every Friday at 1:30pm.
If you want a great picture, go up the Latin-American Tower across the street and find your way to the observation deck.
If you want free admission, visit on a Sunday, but it will be very busy, and you'll still need to queue at the box office inside.