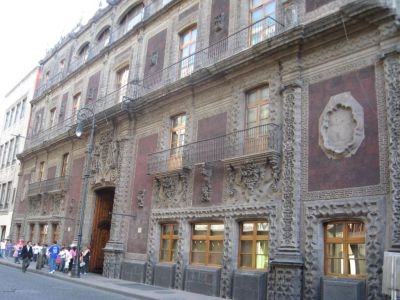 A massive baroque mansion with elaborate sandstone carvings surrounding the windows and door frames, the Antiguo Palacio de Iturbide was constructed between 1779-85 for the family of Count San Mateo de Valparaíso, a descendant of one of the original conquistadors, as part of his daughter's dowry. However, the palace is best known as the home of Emperor Agustín de Iturbide, who lived here briefly during his short reign during the tumultuous post-Independence era.

Banamex, the National Bank of Mexico, purchased the palace in 1964, and after a decade-long renovation project, it became the home of the Fomento Cultural Banamex, a foundation dedicated to the promotion and exhibition of Mexican art and handcraft; it was officially inaugurated as the Palacio de Cultura Banamex in 2004. The foundation now hosts high-quality exhibitions of painting, folk art, and exceptional craft in the palace's impressive courtyard; recent shows have included a review of Mexica's ancient mythological traditions, 16th-century architecture, and a selection of amazing Mazahua textiles.

Tip:
Browse at the small but well appointed book/art shop (some art pieces may be high-priced, but are great to look at).