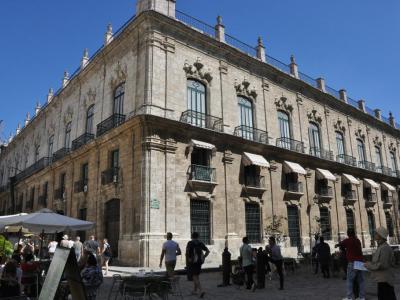 The former official residence of Havana's governors (Captains General), El Palacio de los Capitanes Generales is now home to the Museum of the City of Havana (Museo de la Ciudad) and houses exhibitions of art and historical artifacts, with many of the rooms being preserved with their original Colonial decoration. It is a thick-walled square Cuban Baroque-style building, little altered from the time of its original construction.

The ground floor and mezzanine contain artwork and artifacts from Havana's past. "La Giradilla", a statue that became a city symbol, and was originally located on the tower of the nearby Castillo de la Real Fuerza, stands at the foot of the stairs leading to the mezzanine. The Cenotaph, the oldest colonial monument in Cuba, taken from the original Parroquial Mayor church, is on display in one of the rooms on the lower floor. The Hall of Heroic Cuba contains important objects from the wars of independence and many flags of national significance including the flag of Carlos Manuel de Céspedes, the "Father of the Homeland" (Padre de la Patria). The building also houses the Office of the City Historian, headed by Eusebio Leal, which is responsible for the renovation work in Old Havana.

Why You Should Visit:
To admire not only the aristocratic house and its colonial architecture but also the well-preserved paintings, luxurious furnishings and exhibits inside.
The lovely patio is typical of courtyards of the time, designed to have wind flow through for cooling effect, and you can get good views across it from the 1st-floor galleries.

Tip:
Make sure that you buy a ticket that shows all the exhibits.
Highly recommend having an English speaking guide so you don't miss anything.

This sight is featured in a self-guided walking tour of Havana, Cuba within the mobile app "GPSmyCity: Walks in 1K+ Cities" which can be downloaded from iTunes App Store or Google Play. Please download the app to your mobile phone or tablet for travel directions for visiting this sight. The app turns your mobile device to a personal tour guide and it works offline, so no data plan is needed when traveling abroad.

Discovered and conquered by the Spaniards, Havana has turned into a major religious center of Catholicism in the Caribbean. Although a communist regime is in power at the moment, many of the churches, cathedrals, and other religious buildings are preserved and still give a glimpse of the religious heritage of Havana.

The city of Havana was founded in 1511. Today, Havana is the capital of Cuba and one of the most beautiful cities in the world. Havana is also one of the most popular tourist destinations in the Caribbean region. Almost perfect weather conditions makes it a great spot for taking a vacation. This walking tour will help you explore the center of Havana.

Since it was discovered by Spain, the Island remained under its rule until the late 19th-early 20th century. During that period, it saw a series of wars, revolutions, and coup d'etats. On this tour you will see the key places in Havana related to those events, as well as monuments to the key people who made them happen.