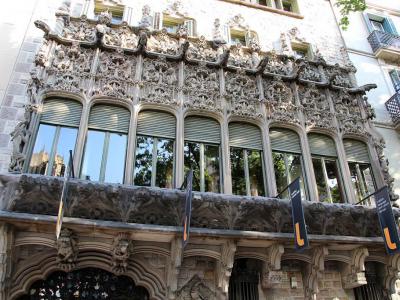 Curious as it may be, but the architectural style of the beautifully detailed Palau Baró de Quadras depends largely on the angle you look at it. If you approach it from Avinguda Diagonal, the building appears rather Gothic, reminiscent of the Northern European palaces of the period, noble in character with the intricately carved details. The long, ornate balcony with the busts of eminent Medieval and Renaissance personalities, the gargoyles, toothy fish and sword-wielding knight on the facade, as well as the mansards on the upper floor, are all fully compliant with the medieval theme.

However, if you look at it from the other side, facing Carrer del Rosselló, the building's decoration appears more subdued, but just as lovely, Modernist style, with the floral motifs extending both horizontally and vertically along the three balconies and down the four floors. The mastermind behind the design is Josep Puig i Cadafalch, who originally envisioned this as a mansion. The rear of the building, however, shows that the other purpose of it was to provide apartments for family use.

The interior is also surprising and eclectic, dominated by the Mid Eastern and East Asian themes especially vivid in the wealth of mosaics and polychrome woodwork. Bold Ionic columns, covered with floral and plant motifs, reflect the English Arts and Crafts style, while the hardwood flooring abounds in a variety of geometric designs.

The house museum holds guided tours every Wednesday between 11am and 1pm, where you can visit the multiple rooms and learn about the building's history. The English tour starts at 11, while the Catalan and Spanish ones commence at noon and 1pm, respectively.
Image by Fred Romero on Wikimedia under Creative Commons License.