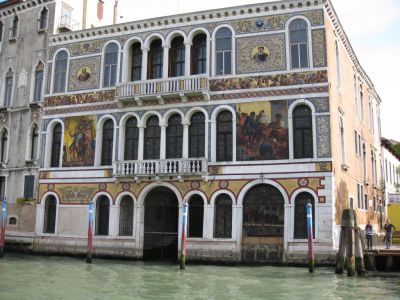 Once owned by the proprietors of one of Venice's largest glass factories, Palazzo Barbarigo, originally built in the 16th century, is distinguished for its exterior clad in Murano glass mosaics. The mosaics were added in 1886 and are said to have been inspired by the similarly adorned facade of St Mark's Basilica.

Nonetheless, when the front mosaic was completed, it didn't quite impress the aristocratic neighbors who accused the then-new owners of the palace of being “nouveau riches” with a garish taste completely out of touch with the genteel decay of the neighboring buildings. Needless to say that this was unfair criticism as many of the Renaissance palazzi on the Grand Canal were once also covered in polychrome and gilt decorations, with elaborate plaster and stucco work that only added to their splendor.

Today, Palazzo Barbarigo stands as one of the most opulent pieces of architecture on the Grand Canal. The mosaic on its central frieze depicts 35 cherubs actively engaged in various artistic activities, such as painting, drawing, sculpture and architecture. Two separate murals commemorate royal visits to Venice: one in the 16th century by the Holy Roman Emperor Charlemagne during which he is depicted speaking to Titian on the scaffold of St Mark's Basilica; and the other one by the French King Henry III, in 1574, arriving on the Doge's barge along with a team of glass-makers.

The portraits of two most famous Venetian painters – Titian and Tintoretto – are found right above these scenes. The lion of St Mark – symbol of Venice – tops one of the portraits, while the back rooster – symbol of Murano – crowns the other.
Image by Deror avi on Wikimedia under Creative Commons License.