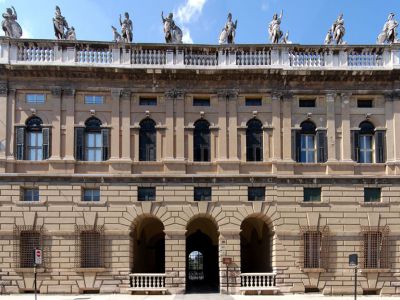 The Palazzo Canossa is a stone palace that was designed by Michele Sanmicheli in 1527. Although construction began in the sixteenth century, the building was not completed until the seventeenth century. It is located between the Porta Borsari and Castello Scaligero and is a very popular tourist destination. The structure design reflects a Mannerist style. It is one of four buildings that designer built in the city.

Like many structures in the city, the building suffered some damage during World War II. Although frescoes by artist Gian Battista Tiepolo were lost during the bombing of Verona, many other elements remain.

Visitors will enjoy viewing the doorway that is decorated with marble columns, a portico, framed arched windows, and a gallery that is festooned with mythological creatures. Alexander I of Russia, Napoleon Bonaparte, and Francis I of Austria are just a few of the famous visitors who have graced the palace halls.

The palace is located near many interesting sites. Other attractions near the Palazzo Canossa that you can enjoy include the Arco dei Gavi, the Palazzo Scannagatti, the Basilica SS. Apostoli, the S. Lorenzo, the Museo Civico di Castelvecchio, the Byblos Art Gallery, the Palazzo Bevilacqua, and the Ponte Scaligero.
Image by Lo Scaligero on Wikimedia under Creative Commons License.
Sight description based on wikipedia

The Adige river adds to the romantic ambience of Verona. Near the river's banks, one will find fascinating cloisters, museums, theatres, and gardens which are just a few of the city's well preserved treasures.