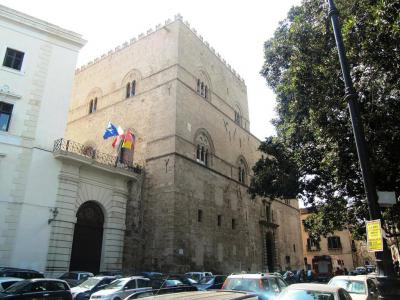 Palazzo Chiaramonte-Steri was begun in the early 14th century, and was the residence of the powerful Sicilian lord Manfredi III Chiaramonte. He commissioned the decoration of the Sala Magna ("Grand Hall"), with a frescoed wooden ceiling by Cecco di Naro, Simone da Corleone and Pellegrino Darena.

From the late 15th century to 1517 it housed the Aragonese-Spanish viceroys of Sicily; later it was home to the Royal Customs and, from 1600 to 1782, the tribunal of the Holy Inquisition. The palace was restored in the 20th century, with the elimination of numerous elements associated with its role as a jail of the Inquisitions. During the works, the grooves left by cages in which had been hung the severed heads of the nobles who had rebelled against emperor Charles V were discovered in the façade. The palace is now a museum; among the artworks, it houses Renato Guttuso's Vucciria.