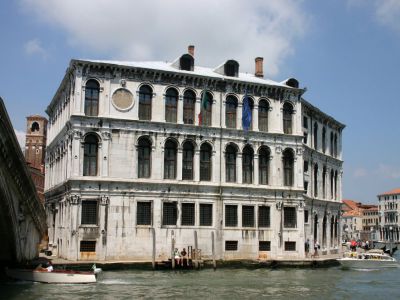 Built in the 15th century and finished in 1488, this palazzo was subsequently enlarged in the 1520s and served as the headquarters for several financial magistrates, including the Camerlenghi from whom it takes its name, the Consuls of the Traders and the Supra-Consuls of the Traders. Due to this function, the lower floor was used as a jail for those who defaulted on their debts: the location near the crowded Rialto Bridge served as an admonition for the people passing by.

Currently housing the regional main offices of the Italian Comptroller and Auditor General, the three-storey palazzo has a pentagonal floor plan which follows the shoreline of the Grand Canal. It has tall windows with centrings, divided by false columns and decorated with friezes. There were once polychrome marble and porphyry slabs, now lost. The medallion on the facade once incorporated a painted St Mark's lion.

Due to the Venetian tradition that, when leaving their post, magistrates would leave a religiously themed painting and a portrait in their former office, the Palazzo dei Camerlenghi came to house numerous artworks. Sometimes these paintings expressed social-political notions of civic virtue. These were removed during the French occupation; some eventually returned to Venice, mostly to the Gallerie dell'Accademia.
Image Courtesy of Wikimedia and Adriano.