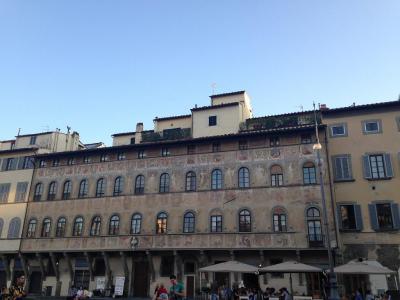 Of medieval origins, Palazzo dell'Antella is the fruit of a series of restructurings and mergers of several housing estates during the course of time, its current appearance having emerged around 1620 when Senator Niccolò Dell'Antella commissioned the repainting of the whole façade, executed by a group of thirteen artists (including Domenico Passignano, Matteo Rosselli, Ottavio Vannini and others).

The painted decoration consists of a series of panels with allegorical representations, puttos, flowers, vegetable motifs and arabesques, while at the centre stands the bust of Cosimo II de' Medici.

As they become closer to the church of Santa Croce, the windows are nearer to each other, allegedly in order to provide an illusory enlargement of the facade, though for many onlookers it is just a funny architectural solution that poses the question of how the rooms look on the inside.

Another interesting feature is the palace having become known as the "Palazzo degli Sporti" at one point, because spectators used to watch the "calcio fiorentino" in costume from the windows. This was, apparently, an early form of football whose cradle is now considered to be the Piazza Santa Croce, where the palace lies. Below the palace's third window one can even spot a marble disk, said by some to mark where the dividing line was drawn across the piazza when the game was played.
Image by Rodrigo Pereira on Wikimedia under Creative Commons License.