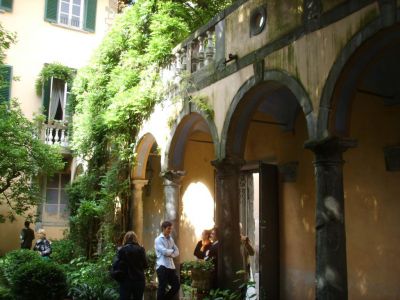 The Palazzo Fontana-Busdraghi is located at the intersection of Via Busdraghi, 7 and Via Fillungo. The facade was completed in the sixteenth century, with a portal with columns and wooden doors decorated with coats of arms. The palace and its garden have an unusual shape. In 1630 the property was owned by Francis Busdraghi and in the second half of the century, he documented the existence of the garden, enclosed by high perimeter walls topped by a balustrade which is still viable. Today, the palace is considered a tourist attraction.
Image by sailko on Wikimedia under Creative Commons License.