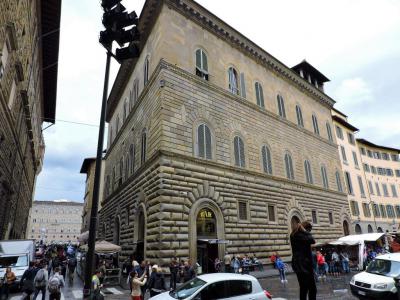 The prominent Gondi family, bankers who had made their fortunes in Naples, commissioned Giuliano da Sangallo to build them a palace commensurate with their position. Inspired by other major works of stately buildings in the city, such as Palazzo Medici and Palazzo Strozzi, he borrowed elements from these earlier works, such as the cube-shape set around a central courtyard, the ashlar sloping on each of three floors, and the arched windows.

Compared to his models, however, Sangallo was able to modify the use of these elements, making it one of the most successful Florentine buildings of its time. The most innovative element is in the design of the windows: the profile of stones arranged in a radial pattern, which resemble the facets of a precious stone. The windows on the second floor were designed slightly wider than the others to compensate for the optical foreshortening.

Tip:
If possible, try to take a tour of the palace to see its lavish painted ceilings and enjoy one of the best views of central Florence's towers and domes from its rooftop terrace.
Image by Dimitris Kamaras on Flickr under Creative Commons License.